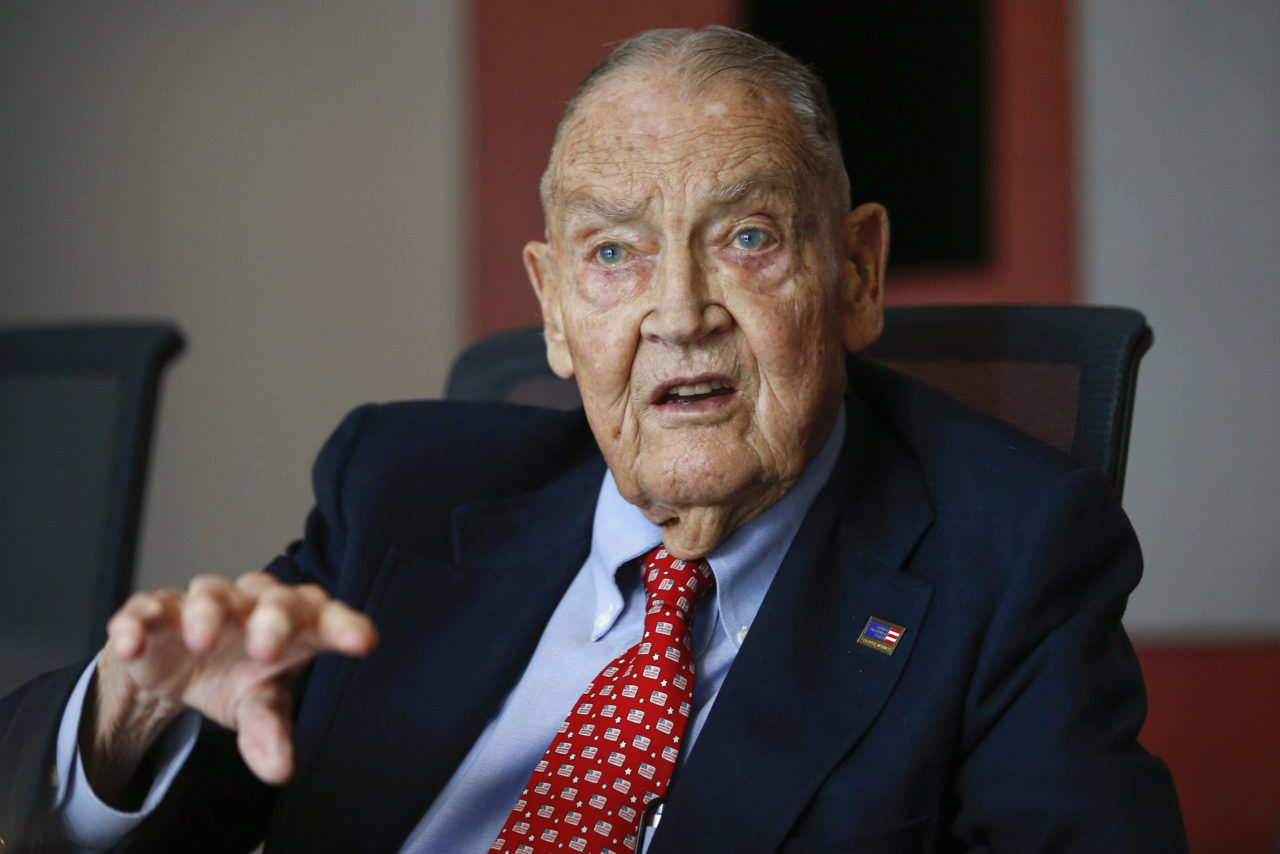 This piece collects tributes reflecting on Jack Bogle’s contribution to the financial services industry over his long and illustrious career. As the world markets fluctuate and fund managers fight to gather assets, it is worth reflecting on the state of the fund management industry now, which was largely disrupted by Jack Bogle.

Excerpts and quotes are from (1) Rob Arnott from Research Affiliates, (2) Ted Aronson from AJO, (3) Cliff Asness from AQR, (4) Tamar Frankel from Boston Univeristy, (5) Robert Huebscher from Adviser Perspectives, (6) Burton Malkiel from Princeton University, (7) Don Phillips from Morningstar, and finally (8) our very own Larry Siegle from the Chicago Global Advisory Board and CFA research institute.

Has anyone in the past century disrupted the world of investing (and perhaps finance more broadly) more than Jack Bogle? I think not. Sure, Bill Sharpe, Harry Markowitz, John Burr Williams, Warren Buffett and his mentor Ben Graham, have all had lasting impact. But, Jack begat the retail index fund industry, asset management through a mutual company owned by its customers, fee wars (he was hardly the first to play that game, but he played it with gusto), and the list goes on. Even though he was a vocal critic of ETFs, and of our own idea of the Fundamental Index, neither would likely exist today without the astonishing prior successes of cap-weighted indexing.

He was inspiration for my decision to launch Research Affiliates; a few months before launching the company, I had dinner with him to pick his brain. He started the Vanguard Group at age 46; I started Research Affiliates at age 47. He urged me to proceed, with the counsel: “Until you try it, you cannot know how much fun you’ll have!” Sure, we differed on smart beta and fundamental indexing. But, it was always with mutual fondness and respect. He was a curmudgeon and an occasional scold, whom we could all love for his pithy insights and for his demand that we all look to “do the right thing.” He truly put clients first. Obviously, he became rich. But, he did well by doing good – far too rare in the world of finance. His customers benefited from his efforts scores of times more than he did. He was one of my heroes. I will miss him very much.

Though we knew it was imminent, the day we lost Jack, nevertheless, still felt shocking. While perhaps unlikely, given our age and investing style differences (everyone knows an indexer and a quant active manager can’t be friends, right?) we had become quite close over the years. He was such a force for good, and had such vitality, it’s difficult to imagine the world without him. He was one of the last heroes and one of the last old school gentlemen. And up to the very last he was working! He was writing his business memoir (and a history of Vanguard) and commenting widely and, of course, honestly and bravely, on the burning investing issues of the day. Put simply, no single person has ever done more for investors while asking less for himself. Nobody comes within a mile. We won’t see his like again.

Jack Bogle sought to charge lower investment advisory and trading fees and yet raise the overall income for the advisory and management institution. How did he do that? (i) He reduced the problems of brokers commitment and sales-talk by paying brokers salaries. (ii) He in fact vested the ownership of the adviser in the investors. He created a large group of cooperative actors. (iii) Thus, he changed both structure, allocation of costs and culture of Vanguard.

To do that he had to fight for legal change and ensure an internal unique culture. Not surprisingly he attracted cost-sensitive long term investors. Jack Bogle was a unique consistent realistic dreamer for decades.

He left a legacy demonstrating that one could (i) reduce costs for investors (ii) attract personnel that cooperated among themselves and sought to serve the investors (iii) create a trustworthy fiduciary service operation and (iv) not only grow, but become an enormous, rich, and creative organization and a model for all to follow.

Jack Bogle was a fiduciary. It is not surprising that he was an adviser to the Fiduciary Institute. He will continue to live with us and guide us.

I had the privilege of reading the other tributes that appear here before I wrote mine. I will not repeat what others have said so eloquently, except to say that I agree with every word that was written.

I will comment on one aspect of Jack’s career that, perhaps, has not been sufficiently highlighted. He continued to make valuable contributions and to be intellectually engaged, well after he left his day-to-day position at Vanguard. Indeed, judging from Jason Zweig’s tribute, he was at his desk until shortly before his death. It is rare to find someone with the intellectual stamina and drive to pursue their profession so late in life. But working on behalf of investors was his passion, he wasn’t willing to give it up.

His achievements truly spanned his lifetime and for that he should be a role model for all of us.

Jack Bogle was a loyal Princeton graduate, who supported his University with both financial and intellectual contributions. Others will surely comment about these many contributions. The one I know best concerns his founding support of the Pace Center for Civic Engagement. Jack saw the Center as the embodiment of his moral conviction, that the purpose of life was to help make life better for others rather than to seek personal gain for oneself. The now-long-established success of the Pace Center, together with the new program of Bogle Fellows in Civic Service (established by Jack’s son and daughter-in-law in his honor), means that Jack’s commitment to service is well known in the Princeton community. What may be less known is how his undergraduate experience shaped his entire business career. The way I like to tell the story to Princeton audiences is as follows. Some time ago – at a sister institution in New Haven, Connecticut – an undergraduate economics concentrator named Fred Smith wrote a thesis about the way packages were being delivered in the United States. Smith argued that the U.S. Postal Service was run inefficiently and that a competing private delivery service was badly needed. The thesis was given a grade of C and was described as being totally impractical. Smith then went on to found Federal Express, on the basis recommended in the thesis.

At Princeton, a young economics student named Jack Bogle wrote his thesis on the mutual fund industry. He described the distribution system as antiquated and the fees that were being charged to ordinary investors as unconscionably excessive. He documented that the net returns being earned by investors were wholly inadequate and suggested that a new kind of mutual fund company was badly needed. I could not find the grade Jack Bogle received, but it must have been a superior one since he graduated with high honors, and the senior thesis represented at least half of his final standing in the department.

Jack went on to establish the Vanguard Group, along the lines outlined in that prescient senior thesis. Vanguard today is a $5 trillion enterprise and the most consumer-friendly financial institution in the world. Because of Jack’s vision and moral commitments, Vanguard investors have saved billions of dollars in fees and have been able to achieve better financial security and a more comfortable retirement. Warren Buffett has rightly described Jack Bogle as the best friend the ordinary investor has ever had.

A call from Jack Bogle became a rite of spring for me. Each April, he would call in advance of the Investment Company Institute’s annual General Membership Meeting to graciously ask if I could join him for dinner in Washington. “I need someone to talk to at these ICI functions,” Jack would lament. “Everyone over 50 years old averts their eyes when they see me coming at the ICI,” said Jack, noting that many senior executives would avoid him. “On the other hand, everyone under 35 comes up and wants to shake my hand, saying that I inspired them to get into the fund business!” Now Jack may have exaggerated the neglect of the older generation, but he certainly didn’t overstate the admiration of the younger ones. He was a beacon for many of us in the industry and a reason that we took pride in being a part of it.

One ICI meeting in particular stands out for me. It was the 50th anniversary of the meeting and the ICI held a special dinner, to which Jack and I were both invited. As I listened to industry leaders praise their many accomplishments, it occurred to me that when the ICI celebrated its 100th anniversary, all of the celebrated people in that room would be long forgotten, save one –Jack Bogle. His achievements so tower over those of his peers that he truly was in another league. While other industry leaders fought over near-term market share, he secured a place in history and created the only organization represented in that room that one could say with great confidence would stand the test of time and still exist in its current form 50 years from now

Jack was a man for the ages. Investors for generations to come will benefit from his life’s work.

Much has been said about Jack being a great innovator and a hell of a nice guy. I agree with all of it. I’d like to emphasize a different aspect of his accomplishment.

Economic progress is not just new gadgets and rising wages; it’s the declining cost of necessities. Jack is the most recent of a long line of entrepreneurs who’ve made consumers better off through radical decreases in the cost of basic goods and services. This line includes Thomas Edison, whose inventions cut the cost of lighting by an order of magnitude; Henry Ford, who did the same with transportation; Sears and Roebuck; and Sam Walton. Jack Bogle was the kindest and most gentlemanly of this revolutionary bunch.

Jack’s innovation not only dramatically cut costs but increased the quality of the product. As Bill Sharpe pointed out, active management, relative to a fairly constructed benchmark, is a zero-sum game before costs and a negative-sum game after costs. If you can’t reliably beat the market, an investment product that simply holds the market is a better product than a randomly chosen one that tries to beat it.

Jack intuited the difficulty of beating the market and wrote about it in his senior thesis at Princeton, two decades before Sharpe’s CAPM and market model. But it was Sharpe who created the formal framework that would allow index funds to be born, flourish, and later grow to be a dominant force in investment management. With Sharpe’s work in place, all that remained was for an entrepreneur to implement it. Both the Wells Fargo team and Jack deserve credit for successfully commercializing portfolio theory.

However, Jack also democratized it, bringing its benefits to every saver who wanted them, and for that he stands out as the foremost investment executive of our time.

Larry Siegel, author and director of research for the CFA Institute, Chicago, IL