“Mutual Fund investments are subject to market risks. Please read all scheme-related documents carefully before investing” is the prominent disclaimer in every advertisement of mutual funds that we come across. While this disclaimer is true, are mutual fund investments only subject to market risks? Over the past 5 years, the S&P 500 has returned 12% per year but the average equity investor has only earned 8% per year (DALBAR 2020). If markets were the only risk factor, then why is the gap between market return and investor return so large?

The study ranked all the mutual funds into deciles (10 equal sized bins) based on 1 year past performance. The returns of these funds were then observed 1 year into the future. The results are as follows:

This exercise was repeated with a 3 year and 5 year look back period. The results were as robust.

Selecting mutual funds based on past performance might seem intuitive but the data is clear that there is no persistence in performance. The Indian mutual fund industry isn’t an outlier. There have been numerous studies on this topic globally and the conclusion is the same in (almost) every country*. The popular disclaimer “Past performance doesn’t guarantee future returns” holds true and should be taken seriously.

Link to the video – https://youtu.be/UfrfltD-Xwk 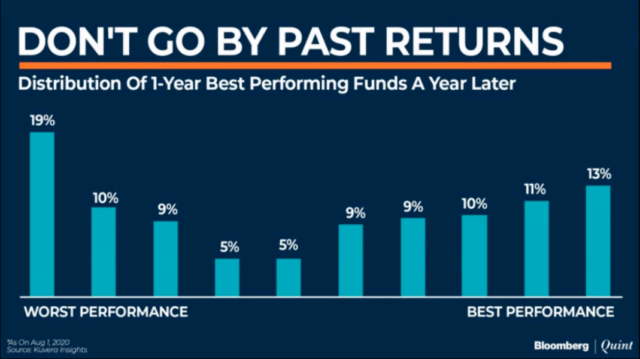 Persistence of mutual funds in other countries:

previousForeword for “Popularity: A Bridge Between Classical and Behavioral Finance”